The imagery of Lunch is full of planes and airports. In fact, the idea for the story occurred to me at the departure gate in Toronto’s Pearson Airport. Observing the people waiting with me, on their individual paths and whom I would in all likelihood never see again, I began to contemplate the points of connection between the unknown potential embodied in each person and the mystery of the anasyrma gesture. I was able to pencil in some ideas on the plane while my daughter took a nap on my chest – she was not yet 2.

Until the advent of the locationless World Wide Web, planes epitomized temporocentric values, providing proof of our omnipotence: we were fast, a ‘global’ culture that had conquered the sky and would soon be on its way to the stars. Certainly in my mind, air travel always has had a mystique for me – the vast distance traversed, the possibility of a new and/or different location, the return home, transformed or no. A part of this I’m sure is the result of growing up in the sixties when air travel was sold in a very romantic way; however, a departure gate is still for me an entry point into liminal space and, despite romance now being out of the picture, I continue to feel it when crossing the passage between the plane and the gate, the air thick with lost time and transition.

The embroideries always started out as drawings, really just scribbles based on the language or the words of Elizabeth’s stories. I would work sentence by sentence -- I could get lost in a sentence. For LUNCH, I started with the mysterious figure ‘SHE.’ 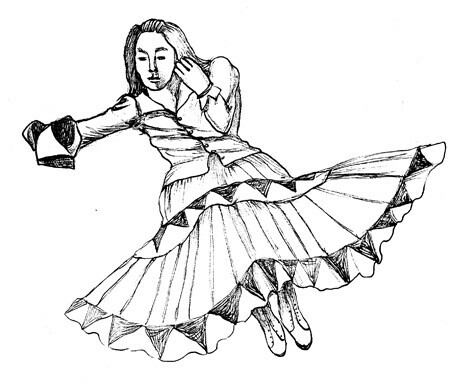 SHE fascinates me because, like the character in the story, I too have been searching for her. I began with a sketchbook, working through the implications and experiences of the character in paper/paint/glue/collage/text form. The sketchbook characters and I explored a lot of territory for a few months -- my sketchbook trials with SHE. Through this process I acquired my creative edge, even though the sketchbook imagery was not at all like the finished pieces. Simply put the book was the road that allowed me to arrive at my final destination.

At the time, I was enamoured with the process of free motion embroidery on cotton or linen.
I drew each of the pieces as a scribble, evolving it only a little, then sat down at the machine and allowed the imagery to reveal itself. I used a technique similar to old-fashioned glaze painting: starting with the darkest coloured threads, I layered in the shadows, then gradually shifted to lighter and lighter thread colours/tones, enhancing only a touch of highlight at the end.

This was all just before September 11, 2001. I remember shooting photos of the model, Rebecca Cohen, performing in the skirt at the departure gates, security guards casually looking on. I can’t help thinking about that last image of the plane flying into the glove with the words “Never Return” and what a different resonance they have now. At the time the idea was to focus on the plane as a symbol of transformation; since we began, however, the symbol of the plane forever altered and there is an extra layer to the story and images now.

Copyright © 2021, Eleanor Hannan and Elizabeth Dancoes's 1001 Funny Things you can do with a Skirt. All rights reserved. | Administration | Powered by ArtSites.ca